Hundreds of men in Ethiopia’s restive region of Tigray were released on Thursday evening, eyewitnesses and aid workers said, following a CNN report into their detention that prompted international outcry.Speaking to CNN on condition of anonymity, out of fear for their safety, the sources said that the soldiers had released all but a “handful” of the men, who were detained on Monday by Ethiopian and Eritrean forces operating in the region.A CNN report published Thursday found that hundreds of men had been rounded up in Shire, a town in Tigray, on Monday this week. Witnesses described, on condition of anonymity, how Ethiopian and Eritrean soldiers had beaten and harassed the men. They also said the soldiers broke into at least two shelters for people displaced by the conflict, including an abandoned school, before shouting: “We’ll see if America will save you now!”One aid worker told CNN that the soldiers had accused the detainees of being members of the Tigray People’s Liberation Front (TPLF), the rebel group leading the resistance against Ethiopian government forces and their allies.”The soldiers kept telling us they did this because these men were TPLF, but the raid was indiscriminate. How did you know who was TPLF and who wasn’t?” the aid worker said.

Tigrayans told, ‘We’ll see if America will save you now,’ as hundreds rounded up by Ethiopian and Eritrean soldiersA released detainee described physical abuse by Ethiopian and Eritrean soldiers while in their custody.”They take us out one by one and torture us,” the man said. “This is the third time I’ve been beaten by soldiers like this. People here start running and are scared every time they see someone wearing military uniform. The world has to hear our cries and do something — we are living in terror”Witnesses and aid workers credit media reports and the ensuing international outcry for the men’s release.”The fact that CNN reported on this, the UN and then Senator [Coons] spoke out about this, it clearly made them know that they are being watched,” he said, referring to US Senator Chris Coons, who traveled to Ethiopia in March as a personal emissary of President Joe Biden.CNN shared its report with Coons on Thursday. The Senator then raised the issue during a Senate Foreign Relations Committee hearing on Ethiopia, calling for “accountability” for the mass detention.A crowd is seen outside the Guna distribution center on the outskirts of Shire, Ethiopia, in this satellite image captured on May 27. Detainees say they were beaten and tortured at the facility.Babar Baloch, a spokesperson for UNHCR, the UN refugee agency, told reporters in Geneva on Friday that authorities had indicated more detainees would be released in coming days, saying the refugee agency was “deeply alarmed” by reports of the detentions. The UN said it was unable to verify this claim independently.”As the mandated agency lead for protection of internally displaced persons, UNHCR was immediately in contact with the Ethiopian authorities, and we continue to raise urgent concern for the safety of those removed from the camp with the authorities,” Baloch said.Baloch called on all parties to the conflict to ensure displaced civilians in shelter remain protected there.

Four military vehicles first encircled the Adi Wenfito and Tsehay camps for displaced people, witnesses said, before soldiers began rounding up young men, forcing them onto buses and taking them to a location believed to be on the outskirts of Shire. The soldiers broke into an abandoned school housing the refugees. It was there that witnesses said they shouted, “We’ll see if America will save you now!”

Massacre in the mountains“They forced open the door, the men didn’t even get a chance to put their shoes on. The soldiers had their guns locked, [ready to shoot],” one witness said.One woman said two of her sons — aged 19 and 24 — were dragged from their home at around 9:30 p.m. that night.”They didn’t say why they were taking them, they just rounded them up, beat them and took them away,” she told CNN, adding that she was too afraid of what would be done to her sons to ask any questions.Several of the men who were rounded up were released late afternoon on Tuesday, after they identified themselves as aid workers. They told CNN hundreds of young men continue to be detained at the Guna distribution center, an aid and foodstuff storage facility which has now been converted into a military camp.One man described hours of beatings by Eritrean and Ethiopian soldiers.”Many of us are young but there are people there who are much older who won’t be able to withstand the beatings much longer,” he said. 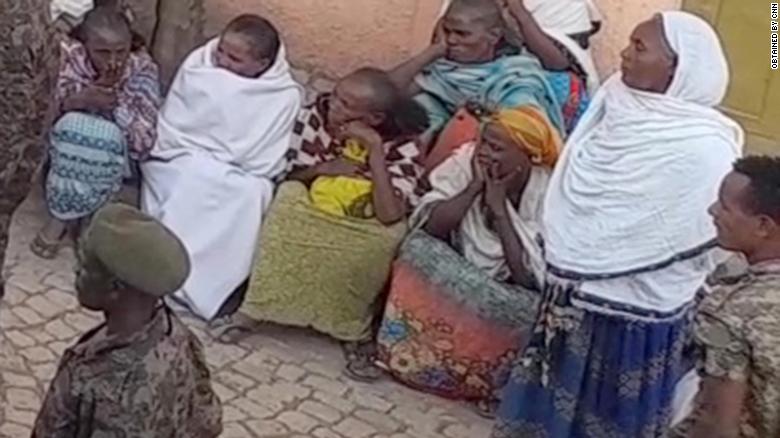 This screenshot from video obtained by CNN shows relatives of detainees waiting at a UNHCR compound for news of their family members.Eritrean Information Minister Yemane Ghebremeskel denied the reports and dismissed previous CNN reporting, saying: “For how long will you continue to believe at face value any and all ‘witness statements’ … We have heard so many planted or false stories.”President Biden said in a statement late Wednesday that he is “deeply concerned by the escalating violence” in Ethiopia and condemned “large-scale human rights abuses taking place in Tigray.”Robert Godec, Acting Assistant Secretary, Bureau of African Affairs, said Thursday that if the conflict does not “reverse course,” Ethiopia and Eritrea should anticipate “further action” from the US.”It cannot be business as usual in the face of the violence and atrocities in Tigray,” Godec said during a Senate Foreign Relations committee hearing.The conflict in Tigray has now raged for over 200 days pitting the TPLF against the Ethiopian National Defense Force, Eritrean soldiers and Amhara ethnic militia. From the start of the conflict last year civilians have been targeted by Ethiopian government forces and allied Eritrean and militia forces.

Three known scammers who are very active in Singapore

Tesla shorts are having a much, much better year than in 2020

Biden calls out Republicans who have taken credit...

Tesla shorts are having a much, much better...

Three known scammers who are very active in...

Five reasons quantum computing is the future for...